The last couple of years as an actress have been lucky ones. I worked right up until December 30th, 2018.  In terms of getting work, I was busy, busy, busy. Straight offers, long runs, working with so many people I admire and respect and, of course, a Soderbergh movie with Claire Foy (I think I've mentioned that once or twice).

And all without representation. Thank you, Casting Directors.

After years of ups and downs I ended 2018, feeling very grounded and hopeful for more work to come. I had my Green Card, Equity card and was a member of SAG.  I was ready for more. 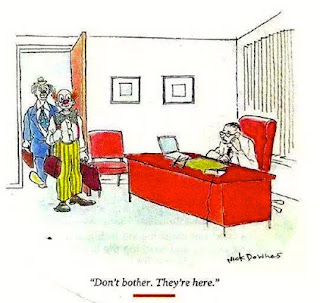 Are we a pair?
Me here at last on the ground,
You in mid-air,
Where are the clowns? *

As is the case with many actors, though, there are highs and lows and periods of "resting".  And I spent much of the years feeling down and thinking I'll never work again. So, as the year is coming to an end, I decided to practise (British spelling for the verb) what I preach with The Actor's Friend and gave myself homework I have given to students who have felt stuck.


Isn't it bliss?
Don't you approve?
One who keeps tearing around,
One who can't move,
Where are the clowns?
There ought to be clowns.*

After years of tearing around, I felt I was  doing well so maybe took things a little for granted.  So many people said after UNSANE, "Your career is going to take off." And being offered jobs without auditioning is so lovely! Heading to the grind of E.P.A.s after that can be a struggle. And I still could not find representation. I've spent much of the year on a bit of a downer.
And it's time to stop.

Yesterday, after reflecting on Thanksgiving, I gave myself a good talking to and went through my planner to look at everything I did achieve in 2019 and accentuate the positive. In no particular order:

These are such a joy to be a part of. I've been involved in many this year, ranging from a first table read to A.E.A. 29 hour staged readings. It's such a thrill to be there at the early stages of new works or revisiting old works. Some are in very early stages.  Some are on a path to Broadway. Most projects are years in developing and it's very exciting to be a small (or maybe loud) voice in that process.

I love how small this business is. I first met the wonderfully talented LeeAnne Hutchison when we worked together Off-Broadway in A Lovely Sunday for Creve Coeur last year and we've kept in touch and worked on 3 readings together this year! While we were chatting, I explained I was still struggling to find representation and she kindly sent my materials to her manager, Robert Graham at Baker Management. He sent a lovely email, we met in person and it was a great match! He's been sending me out and getting me in some great rooms.

So often these are made with such great love and passion.  This was certainly the case with both of these short films. Mouthpiece, directed by Yaron Lotan and The Perfect One, directed by Matthew Szewczyk.  And it's always nice to get some more IMDb credits!

Don't you love farce?
My fault, I fear
I thought that you'd want what I want
Sorry, my dear!
But where are the clowns
Send in the clowns
Don't bother, they're here.*

I've been on hold for 2 commercials, a movie and 2 T.V. shows.  Frustrating as this can be for an actor to be so close but not book, it also gives tremendous hope. It's the sign of a good audition and you're never auditioning for just one job. Good C.D.s will remember and call you in again. In fact, one was lovely enough to ask my commercial agent to tell me how right I was and that she would certainly be calling me in again.

I've been taking class with the glorious Helen Gallagher since arriving here in 2008. Every Tuesday, it's a joy to sing and continue to learn from her. In June, I had the huge honour of singing at The Irish Rep 30th Anniversary Gala at Alice Tully Hall, thanks to the brilliant Musical Director, John Bell. And, of course, every week there is Polly's Follies.

This slow work year has meant I've been able to visit my family more than any other year. Last year, I was in A Child's Christmas in Wales at Irish Rep. and had to miss holidays at home. And while I'd love to be in a play just now, I'm incredibly excited to see all my nieces and nephews and bring in 2020 with family.

Isn't it rich?
Isn't it queer?
Losing my timing this late in my career
But where are the clowns?
There ought to be clownsWell, maybe next year.*

*Send in the Clowns,
Music and Lyrics by Stephen Sondheim