Growing Up, Making Choices. Ignoring All Other Voices.

When I first started blogging (all of 3 weeks ago), I thought it might be a good idea to use a theme for the titles and categories. Sondheim seemed the obvious choice. Those of you who know me understand. Maybe this is just copying Marc Cherry’s idea for his Desperate Housewives episode titles.  Maybe it is because I do not have clever enough headings of my own.  Maybe it is just because he manages to say the right thing about everything!
I’ve found myself, over the last few days, singing my own little medley of songs from “Into the Woods” (so much good stuff about growing up) and both versions of “Growing Up” from Merrily We Roll Along (Frank’s and Gussie’s: I think Sondheim wrote the latter for Louise Gold in the brilliant Leicester Haymarket production – correct me if I’m wrong, Sondheim geeks).

And my brother (the last singleton in the family, apart from me) got married. 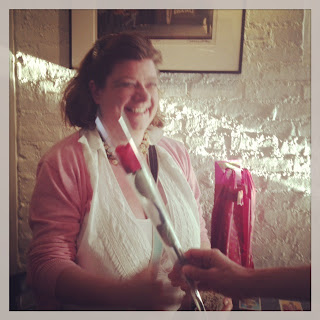 If someone had told me ten years ago (or even 5 years ago) that I would be alone and childless at this point in my life, I think I would have been ready to slit my wrists.  But I am here and I have never been happier.  That is a trite thing to say. Happiness is so difficult to quantify, but I am pleased about my choice to be here in New York and glad that I have taken the chance I have taken. And, in fact, I am not alone and childless.  I have 4 glorious nieces and  6 handsome nephews (the joy and love without the responsibilities) and I do not feel alone at all. I feel more loved and supported now than I ever did when I was in a relationship.

I knew as a teenager that I wanted to act.  My plan was to go to drama school in London after completing my degree in Theatre and Philosophy at Glasgow University. I did not follow through and spent much of my twenties regretting that decision. I performed in plays and musicals here and there over the years but it took me more than ten years to pluck up the courage to pursue it properly.  No half measures.  I quit my job (I was a high school drama teacher), remortgaged my flat and moved to New York to study acting full time. I became that obnoxious mature student who sits at the front and does extra homework. I realise now, that if I had gone to London in my early twenties, I wouldn’t have lasted five minutes. I would have been crushed by the rejection, the brutality of this business, the whole lifestyle. I can see that now. I am blessed and grateful.
And the best part is, I am just getting to the right age to play all those juicy roles I dreamed about when I was sixteen. I wanted to be the Nurse, not Juliet.  Mrs. Lovett, not Joanna.