Now there isn’t much pretty countryside on the travels of an auditioning actor pounding the New York pavements.  But traveling’s the fun!  Isn’t it?

As promised in my previous post (Merrily We Roll Along), I returned for day 3 of the E.P.A.  (Equity Principal Audition). I rose earlier, I joined the bizarre snaking line of fellow actors.  Spotted some familiar faces and waited.  And waited. Signed my name. And waited.  I had to leave so, as ever, used the wonder of Audition Update to check how things were going. Now this monitor was on the ball. And friendly.  And helpful.  She managed to get through ten E.M.C.s (Equity Membership Candidates) before lunch. Already the chances of being seen were higher than the day before.  Hope was high.  Number 11 and 12 were smiling and laughing.  We reminisced about yesterday, discussed our odds as if there were any rhyme or reason to this crazy business.
The afternoon was lovely.  My friend, Rosie Cosch who had been at another E.P.A. joined me.  Time passed quickly and happily. But, here’s the problem.  The time was passing but no more E.M.C.s were being called.  The monitor remained efficient and positive but those Equity members were coming in in dribs and drabs and taking alternate slots and we were once again, losing hope as 5 o’clock rolled around. By 5.30p.m., the monitor called it.  ”I’m so sorry, E.M.C.s won’t be seen.” It feels like she is pronouncing the time of death.  One little non equity girl who has been sitting since 7a.m. dressed and ready to impress, smiles sweetly and changes into her leggings and  picks up her rolling suitcase and begins her trek back to New Jersey.  I curse and say to my friend “Let’s go for a drink!”. 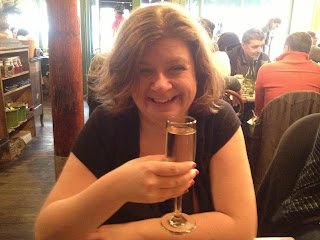