I woke up today and spoke in an American accent.
Not because I have forgotten my roots.  Not because I have turned into Sheena Easton. I chose to speak this way. And I booked a job.
My journey with my American voice has been long and interesting (well, I find it fascinating, but that’s because it’s all about me.) As with many actors, I thought I had a firm grasp on what an American accent was and I could do it without any trouble. Boy, was I wrong.  I now look back and think I was some kind of combination of Fran Drescher and Miss Adelaide. I admit a little of a snooty attitude to taking speech class at HB Studio.  As a foreign student, I had to take speech with the other foreign students who had English as a second language. (Glaswegian could be considered another language, but that’s a whole other blog.) I resented it. I was wrong again.  Enter Amanda Quaid! A class and teacher who changed everything for me. For the better (no offence to the great Fran and Adelaide).

Of course, I am happy to play the Scotch Irish (please enlighten me what Americans mean by that) drunk/mother/nanny etc. Heck, I’d even play the maid! I realised, though, that if I wanted to be cast in anything other than Irish plays (most Americans think I am Irish), I needed to master a passable American and not be a caricature (I’m enough of a caricature in real life without adding a funny voice to the equation). I had to learn that pool and pull do not rhyme in American.
That’s harder than it sounds.

I realized that I needed to work.  And I worked.  I took Amanda’s class and I studied with her privately and I practised (or, if I’m speaking in my American dialect, practiced).  Any chance I had, I used my American.  Chances for me were when I spoke to strangers (a cab, a deli, etc.).  If I had attempted to try it with my family or friends, I would have been ridiculed. There is a fine, fine line when trying to embrace American culture but maintaining one’s heritage.  And when we speak the same language (essentially), that seems to make it more complicated. I argued with some of the E.S.L. students that, in some ways, Amanda’s class was harder for me.  I had to “unlearn” how to say words I had been using all my life.  After hours, weeks, months of drilling and practice and working on the key to being believable (making it sound like ME) skip to today:
First there was a callback for a character from the midwest (I am from the midwest of Scotland, but this was for the midwest of America).  I have learned, after many mistakes, and much advice from Amanda, just to start in American from the very beginning.  So I speak to the bus driver in American.  I order a bagel in American. I chat to people in the lift (sorry, elevator) at Ripley Grier in American.  Trouble is when you bump into someone you know, but I am working on that.
Biggest compliment is that no one asks me where I am from.  If I go in for something American and am not asked, then I know I have convinced them.  Or even better at one audition: I performed my American monologue. Then the casting director chatted to me.  He looked at my C.V. (sorry, resume) and asked “So what took you to Scotland?” 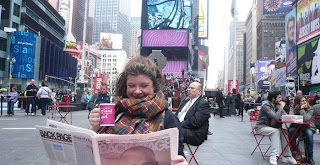 When leaving that first audition this morning, there was a voicemail from a casting director about a reading for a new screenplay: Hi, I received your submission for the role and want to ask you about your accents.
So, I called back.
Me (in own voice): Do you want to hear me speak in an American accent now?
C.D. (in her own voice too, I assume!): Yes, please.  If you don’t mind.
Me (in American): No problem.  I’m not sure what to talk to you about!  You can also see clips on my website from Heidi Marshall’s class and I use my American for those.
C.D. Do you mind holding the line while I watch?
Me: Of course not.
3 minutes of being on hold (seemed like 3 hours).
C.D. Well, that’s impressive.  It’s very hard to be able to hide a Scottish accent. I’d like to book you now if you’re free next Friday.
Posted by The Actor's Friend at 11:06 AM